I hope that many of you have watched the iPhone Development series over at Tekpub by yours truly.  To wrap up the series, Rob and I wanted to show you exactly what is required to get an ad-hoc build out for beta testers, how to get a certificate from Apple in order to code-sign your application, and finally how to submit it to the App Store.

In the end, we'll be submitted the actual official Tekpub iPhone application, which I am currently building as I type this.  I plan on posting about some of the interesting bits as I go.  So on that note....

Any iPhone app that requires data off of the network in order to function will require some up front loading cost.  After all, iPhone apps don't live in a vacuum.

You might think of simply adding some network code into the applicationDidFinishLaunching: event, however this would cause problems.  Though strangely missing from the official documentation, it is known that the iPhone OS will kill an application if appears to hang for more than a couple seconds.  So it is imperative to utilize asynchronous operations in order to load up the data that is needed.

The root controller is called SplashScreenController.  It handles the asynchronous data loading, utilizes a progress bar so it doesn't feel like the app is doing nothing, and notifies the Application Delegate once it is done loading.

The first few lines of code simply set up some UI elements that weren't part of the NIB file.  Doing it this way is certainly a matter of preference, and I find that occasionally building UI controls is easier than in Interface Builder.

Next up, we kick off the async process via a separate class called TekpubProxy.  This class utilizes the excellent ASIHTTPRequest library to do easy asynchronous network requests, complete with progress callbacks.  A bonus is that the progressDelegate automatically detects when you set it to a UIProgressView and automatically updates the status.  How cool is that?!

Finally, when the splash screen is notified that the loading has completed, we call a method on the App Delegate in order to proceed with the rest of the application.

Here is the AppDelegate class:

We utilize a nice cross-fade animation to bring the navigation controller stack into view. The end result is quite nice, and makes the 2-3 second loading time much more bearable. 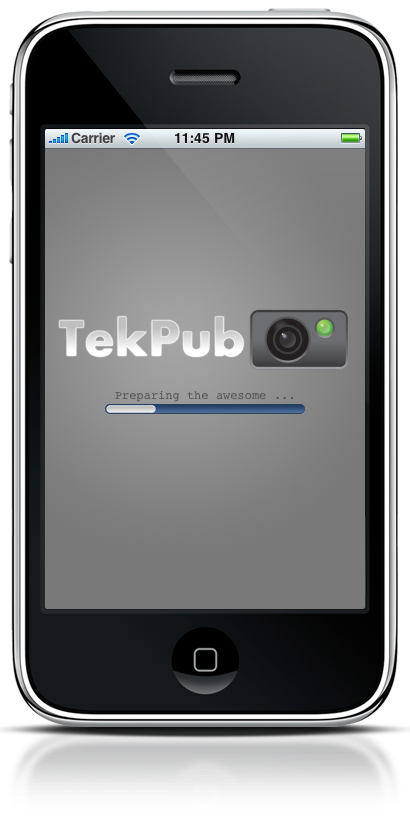 Since Safari 5 was released I decided to set it as the default browser for a week and see how I liked it. Previously my default was Firefox, but mainly because the developer

Most of the iPhone apps that I work on don't exist in a vacuum.  That is, they require data that exists somewhere on the server.  Grabbing data from the server is