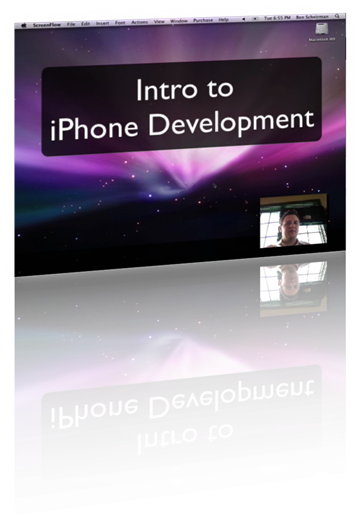 On Tuesday (7/14/2009) we had our monthly geek dinner where we get together, have beer & pizza, and talk about technology.  Usually it is centered around .NET, but lately I’ve been doing some development on the iPhone, so I thought I’d give a demo & talk about how it relates to .NET developers.

In the video I talk about:

There is also some random discussion about the capabilities on the phone, what the APIs are like for the various features, and how some of this relates to .NET and C#.

Unfortunately I forgot to hit record when I was doing a primer on Objective-C, so if you need that, then I suggest reading this article.  (In fact, read up all of Cocoa Dev Central because it’s a great resource.)

The 2nd demo I did I didn’t immediately give credit to (I did later off camera) but I wanted to make sure that I give credit to the original author, over at AppsAmuck.com.  They have a great series called 31 Days of iPhone.   The demo I did can be found here.

Here is the video:

Intro to iPhone Development from Ben Scheirman on Vimeo.

A bunch of people asked me how I learned all of this.  First, I read this book:

It’s a great read, and really helped me grasp programming in Objective-C.

Well the day has arrived.  Our book has finally been submitted to print and it should be in stores on September 7th.  I’m very happy to be finished with

(coming soon to an iPhone near you...)